THE DECLARATION OF CROATIAN INDEPENDENCE IN THE LIGHT OF INTERNATIONAL DOCUMENTS 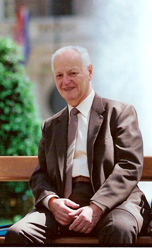 In their struggle for independence and separation from the Yugoslav State established after the First World War, the Croats found themselves divided into two factions; on the one hand a law abiding majority, under the leadership of Dr. Vladko Maček, President of the Croatian Peasant Party, and on the other a revolutionary minority, styled "Ustaša" ("Insurgents"), whose visible head, Dr. Ante Pavelić, lived in exile in Italy.

Initially the Ustaša had received a limited amount of support from Hungary and Italy, but as Yugoslavia began to distance itself from its traditional allies (Great Britain and, more especially; France), and to move closer to Hitler's Germany and Mussolini's Italy, the Ustaša found themselves without any supporters at all.

When Yugoslavia signed the Tripartite Pact on March 25t, 1941, it seemed that the Croatian revolutionary movement had been dealt a mortal blow. Nevertheless, scarcely two days later, on March 27th, a group of Yugoslav army officers, all of them Serbs, incited by the British secret service, staged a coup, sparking off violent anti-German riots in Belgrade, the capital of Yugoslavia and Serbia.

Although the new Yugoslav Government tried to avoid a war with Germany and Italy, Hitler decided that the Balkan situation should be clarified and full control established over the whole region before embarking on the campaign he had planned against the Soviet Union. He also felt slighted by the Serbs and decided to punish them by launching an attack against Yugoslavia. This attack began on April 6th, 1941.

Although at that time most of the prominent members of the Croatian Revolutionary Movement were in Yugoslav prisons and their leader, Dr. Ante Pavelić, in exile, the Revolutionary Movement seized the opportunity to launch a struggle for the liberation of Croatia. One Ustaša group incited the troops to rebellion, capturing the town of Bjelovar and proclaiming the independence of Croatia on April 8th, 1941, a mere two days after the German attack, while the German troops were still far away. News of this event failed to travel far, however, for lack of an adequate mass communication media.

Meanwhile, in an attempt to destabilize Yugoslavia, the Germans had already sent two envoys to the Croatian capital, Zagreb where they contacted Maček. Unable to reach an agreement with him, they met with Pavelić's representative, the former Austro-Hungarian colonel Slavko Kvaternik, who subsequently, on April 10th 1941, was to proclaim, in the name of Ante Pavelić, the Independent State of Croatia.


While the April 8th proclamation had ...