MYTH: "IN SEARCH OF THE FASCIST FERRET" 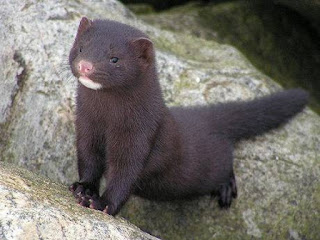 Myth: The Croatian currency, the kuna, has links to fascism.
Reality: The kuna, a small wood marten similar to a ferret or mink, was traded as a pelt in Roman times and was first struck as a Croatian coin in 1256 A.D.

The Fascist Ferret
From 1991 through 1994, the Western media, fed a steady diet of fascist finding directions from Belgrade, had uncovered fascism lurking throughout Croatia. In 1994, the fascist finders turned their attention to Croatia's currency. When Croatia declared independence in 1991, the Yugoslav dinar was replaced with a transitional currency called the Croatian dinar (Hrvatskih dinar). It traded at par with the Yugoslav dinar and was subject to tremendous inflation. From 1991 until mid-1994 the nearly worthless paper dinar, (there were no coins) traded at up to 6500 per U.S. dollar.
Each of the dinar banknotes, from one dinar to 100,000 dinars, depicted the famed Croatian Jesuit scientist Rudjer Boskovic (1711-1787). Boskovic was an astronomer and mathematician who developed the first geometric formula to determine the equator of a planet. He joined the Jesuits in 1726 and studied at the Collegium Romanum. After teaching at a number of colleges, he accepted a post at the court of King Louis XV as director of optics for the French navy. In Paris he met Benjamin Franklin. On behalf of the city-state of Dubrovnik, Boskovic granted recognition to the new republic of the United States of America. Dubrovnik was perhaps the first nation, and, certainly the first republic, to do so.

The dinar was to be a temporary currency until a Croatia had stabilized sufficiently to issue its own distinctive unit of trade. On May 30, 1994, the new Croatian currency called thekuna was introduced. It was divided into one hundred lipa (linden leaf). The kuna was named for a European wood marten, similar to a ferret or mink, whose pelt was used in trade in ancient times. The selection of the seemingly innocent animal and plant unleashed a media fire storm. "Croatia revives currency from Nazi era!" proclaimed the Washington Post. The Los Angeles Times headline read: "Money is named after an animal that the Nazi puppet regime displayed on World War II bills." Another paper was distressed that the Currency "glorifies Croatian nationalism." A New York Times' columnist used the currency change to dredge up very negative Croatian myth conceivable in condemning kuna. A small, furry, wood marten had suddenly been ormed into the "fascist ferret."

Some journalists felt that Croatia should have kept hated Serbian dinar or reverted to the Austro-Hunrian kruna or "crown" despite the fact that a dozen other countries used the "crown". Like the dinar, it too was a symbol of foreign oppression to Croatians. The difficulty that the kuna it seemed, was that it had also been the currency of the pro-Axis government in Croatia during World War II. However, the claim that the symbol of the kuna appeared on World War II Croatian currency was accurate. The name was used, but the animal was never portrayed on any note, coin, or stamp in war-time Croatia.

One economist sarcastically asserted: "When the United States introduces the beaver to replace the dollar because 200 years ago trappers and Indians conducted commerce in hides, then it would be appropriate for Croatia to use the kuna." Apparently the economist was oblivious to the origin of the term "buck" to describe the American dollar. Like the "penny" (one cent coin) and "nickel" (five cent coin), the United States has never actually had a unit of currency known as a "buck." Despite that and over two hundred years of independence from Britain, Americans still use the term "penny." Every American, whether a descendant of the Mayflower or a recent immigrant, knows that a "buck" is a dollar even though trading in "buck skins," the hide of a male deer, has long since ceased.

The kuna was depicted on the Austro-Hungarian coat of arms, representing Slavonia or eastern Croatia, for centuries, and it appeared in both Royal and communist Yugoslavia as a symbol of the region. With all of the focus the Croatian flag received in 1991 with its "fascist" chessboard shield, the fascist finders did not notice the "fascist ferret" in the crown above the chessboard.

In fact, the animal was not pictured on any Croatian currency but could be found on three Croatian coins. Other "fascist" themes on Croatian coins included a tuna fish, a bear, and a bird.
Overlooked in most of the articles was the fact that the kuna, in the form of its pelt, had been used as a unit of trade in Croatia since Roman times and was first introduced on silver coins in 1256. Also ignored was the fact that while the kuna was used by the Ustase government, it was also used by the Partizan government during the Second World War.


Nineteenth century Nazis
One journalist went so far as to disparage the very individuals depicted on the banknotes. Another noted the portrait of the great nineteenth century Croatian leader Ante Starsevic, considered to be the father of his country, and attempted to link him to the Nazis despite the fact that he lived and died in the wrong century.
Others pictured on Croatian banknotes included some of the most famous and revered names in Croatian history. All were dismissed as "rather obscure political figures or poets whose fame never extended beyond Croatia." The head of the Serbian Democratic Forum, a Croatian opposition party, suggested that the inventor Nikola Tesla was not considered because he was a Serb. Mother opined that the late dictator Josip Tito should have been considered but he was not an "ethnically pure Croat." To suggest that the Yugoslav communist dictator Tito be pictured on Croatian currency was absurd, but Nikola Tesla was a more interesting proposition.

Nikola Tesla
Nikola Tesla (1856-1943) was a Croatian-born American who left Croatia at age sixteen and spent fifty years of his life and most of his scientific career in the United States. Because of his Serbian Orthodox parentage, (his father was priest), Tesla was considered to be a Serb by Serbs and Croatians alike. The "prodigal genius" was responsible for thousands of inventions, including alternating current which powers the world. The invention of alternating current has been compared to the invention of the wheel for its impact on the world. Tesla was from Lika, Croatia, and left at age sixteen to study in Graz and Prague. He moved to the United States in 1884 to work with Bell, Edison, and Westinghouse.

Tesla invented the radio in Europe in 1893 and a U.S. patent for radio transmission was filed on September 2, 1897. The patent was allowed on March 20, 1900, and became Tesla's second radio patent. The first was granted in 1898. Tesla's patent for radio was hotly disputed by the company formed by Guglielmo Marconi, who was the first to broadcast his voice in 1895. Marconi's patent was filed on November 10, 1900, and was rejected as a duplicate of Tesla's.
In later years the Marconi Company attempted to strip Tesla of his patent. After years of litigation and thousands of pages of testimony from the world's great scientists, the U.S. Supreme Court ruled Tesla's to be the sole valid patent in June 1943, only months after Tesla's death. The case was much more than academic. The Marconi Wireless Telegraph Company made millions and wanted sole ownership of radio. Like most of his inventions, Tesla was willing to give the technology to the world for free.

In 1904 Tesla envisioned, to the disbelief of most of the world, "A cheap and simple device, which might be carried in one's pocket [which) may then be set up anywhere on sea or land, and it will record the world's news or such special messages as may be intended for it."

In life, Tesla was an eccentric and brilliant man. In death his legacy lived on as his theories continued to be explored and confirmed. It is nearly impossible to enter a modern room or vehicle, whether an automobile or space shuttle, and not see some device, whether a computer screen or a telephone that can not be linked to his genius.

But his greatest legacy may be as on of the few shared heroes of Croatia and Serbia. Golda Meir was as revered by Americans as she was by Israelis. Yet her portrait does not appear on U.S. currency even though she lived in Milwaukee, Wisconsin, (1906-1921) about as long as Tesla lived in Lika. Despite that, there was one final reason that Croatia did not picture Tesla on a banknote. Nikola Tesla and the Tesla museum in Belgrade, were pictured on the 1994 five dinar note of Serbia, a country where he never lived.

Posted by Studia Croatica at 13:04