MYTH: "SERBS HAD NO GUARANTEED RIGHTS IN CROATIA"

Myth: The government of the Republic of Croatia denied basic civil, cultural and linguistic rights to the Serbian minority in Croatia, forcing them into revolt in 1991.
Reality: On the very day it declared independence, Croatia granted extraordinary rights and privileges to Serbs and other minorities in Croatia.

By 1996, it was evident throughout the world that Serbia was the aggressor in Slovenia, Croatia, and Bosnia-Hercegovina during the break-up of Yugoslavia. The transparent endeavor of the war was the preservation of a Greater Serbian state retaining the name Yugoslavia against the expressed will of the majority of the people. Serbia's intentions were less clear to many during the early days of aggression in the Fall of 1991 and Spring of 1992.

A full-scale Serbian propaganda campaign repeated time and again that a "civil war" was being fought to "protect the Serbian minority in Croatia" despite the fact that the Serbs had lived peacefully with the Croatians for a half-century. To reinforce its case, Serbia let it be known that the new Croatian government had made no provision for the rights of Serbs in Croatia. Some in the Western media accepted the mythology as fact, and in some cases continued to repeat it well into 1996. "The Croatians wrote a new constitution, giving no special rights to Croatia's Serbs..." wrote a major daily in late 1995.

The Republic of Croatia is a democratic, legal and social state in which prevails the supreme values of constitutional order: freedom, equality, ethnic equality, peace, social justice, respect for human rights, pluralism and the inviolability of personal property, environmental protection, the rule of law, and a multi-party system.

The Republic of Croatia guarantees Serbs in Croatia and all national minorities who live in this territory the respect of all human and civil rights, especially the freedom to nurture their national language and culture as well as political organizations.

In order to avoid bloodshed and insure a peaceful transition, the Croatian declaration included:

The Republic of Croatia calls upon the other republics of the former SFRY to create an alliance of sovereign states on the presumptions of mutual recognition of state sovereignty and territorial integrity, mutual respect, recognition of political pluralism and democracy, pluralism of ownership and market economy, and the actual respect of human rights, rights for ethnic minorities and other civilized values of the free world.

I. A just solution relating to the issue of Serbs and other nationalities in the Republic of Croatia is one of the important factors to democracy, stability, peace and economic advancement, and to cooperation with other countries.

III. The rights of nationalities and international cooperation will not allow any activity which is opposed to the regulations of international law, especially sovereignty, territorial integrity and the political independence of the Republic of Croatia as a united and indivisible democratic and social state.

IV. All nationalities in Croatia are legally protected from such activities that would threaten their existence. They have the right to respect and to self nreservation of their cultural autonomy.

V. Serbs in Croatia and all nationalities have the right to proportionally engage in bodies of local self-government and appropriate government bodies, as well as security for economic and social development for the purpose of preserving their identity and for the protection of any attempts of assimilation, which will be regulated by law, territorial organization, local self-government as well as institutionalizing parliamentary bodies which will be responsible for relations between nationalities.

VI. Organizations which will adhere to the aims of its constitution and which are involved in protecting and developing individual nationalities, and as such are representative of the said nationality, have the right to represent the nationality as a whole and each individual belonging to that nationality, within the Republic as well as on an international level. Individual nationalities and members have the right, in order to protect their rights, to turn to international institutions which are involved in the protection of human and national rights.

The commitments of the Croatian government to human rights far surpassed those of the United States Declaration of Independence which referred to Native Americans as "merciless Indian savages," or the U.S. Constitution which specifically defined an African-American as "three-fifths of a person."


The Croatian Parliament further strengthened the law on December 4, 1991, by specifically granting local police, courts and governments to Serbs in those areas in which they were a majority. These documents granted Serbs and other national minorities full protection ol human rights, guaranteed proportional representation in government, the right to self-government, and protection from any attempts of forced assimilation. It further encouraged individuals and organizations to appeal to international bodies to secure these protections.

Words and Reality
Despite the written guarantees given the Serbian minority in Croatia, the critics noted that these were only words, not deeds. But the actions of many loyal Orthodox Serbs spoke volumes. When Croatia was attacked, many Serbs tled not to Belgrade, but to the Croatian capital of Zagreb and to other non-occupied areas. More Serbs chose to live at peace in free Croatia than chose to live under Belgrade's Serbian occupation. As late as March 1995, only months before liberation of the occupied areas, 218,000 ethnic Serbs lived in free Croatia as opposed to 184,000 in occupied Croatia. Peaceful Croatian Serbs were not mistreated in free Croatia where several were elected to Parliament and one was its Vice President.

In February 1995, a Los Angeles Times staff writer wrote an extensive article on the Serbs as an "oppressed minority." He quoted only two Serbs by name as examples of the oppression they suffered. One, Veselin Pejenovic was a member of Parliament, a former advisor to the Croatian Ministry of Defense, an advisor to the Croatian Government, and a professor of Political Science at the University of Zagreb. The other, Milorad Pupovac, was a professor of linguistics and head of the Serbian Democratic Forum (an opposition political party), and Head of Applied Linguistics at the University of Zagreb.

The writer admitted that a dozen seats in Parliament were held by Serbs at the time, but did not mention that a Serb, Milan Djukic, was the Vice President of Parliament. It apparently did not occur to Lhe staff writer or his editors that these were unusual posts for an oppressed minority in a country where, according to the writer, Serbs could not hold a job. Conversely, no single Croatian in Serbia, twelve per cent of the population in 1991, held any position of authority after 1989.

In fact, Parliamentarian Veselin Pejenovic noted that the Croatian government, despite the ravages of war, had spent about one and one half million U.S. dollars in 1995 and 1996 for the political needs and activities of the Serb community. That community had so many organizations that in 1996 a National Council of Serbian Organizations (NSSO) was formed in Zagreb. By mid-1996, the Croatian government was supporting forty kindergartens, sixty primary schools, five secondary schools, and three university departments serving minority communities in their own languages with curriculums in nine languages.

In April 1996 yet another Serb asked to return to C:roatia and become a Croatian citizen. Jovanka Broz, the widow of President Tito and a Serb from Croatia, applied for Croatian citizenship. She had lived in Belgrade for decades but even she could no longer abide Slobodan Milosevic, who kept her under virtual house arrest. Her son, Aleksandar Miso Broz, a Croatian diplomat, proposed that Tito's remains also be returned to his birthplace in Kumrovec, Croatia. Since Milosevic appeared eager to destroy Tito's elegant Belgrade mausoleum, it seemed that at last, even Tito might come home to Croatia.

"Forced Conversions"
Finally in early 1995, a Serb writer, Moma Dimic turned to pure fiction in the National Catholic Register while attempting to raise the specter of "ethnic cleansing" by stating that "Croatia's Catholic Church has already "converted" at least 11,000 Orthodox Christians." That statement was immediately denied by both Catholic and Serbian Orthodox leaders in Croatia. On January 11, 1995, Archpriest Jovan Nikolic of Zagreb stated that the rumor of conversions was "instrumented with lies, half-truths, misinformation" and stated flatly that such conversions had not taken place. Despite the words of both Catholic and Orthodox leaders, the myths of forced conversions and the wholesale destruction of Orthodox churches continued oughout the war.

On March 5, I996, the myths were largely put to rest when the Serbian Orthodox Metropolitan of Ljubljana-Zagreb Jovan Pavlovic visited Croatia at the invitation of the Catholic Bishop of Sibenik, Srecko Badurina. Despite years of propaganda, the Metropolitan observed that there was no damage to the Orthodox monasteries and churches that he saw.

After years of hatred and destruction, Jovan ordered his priests and bishops to return to their posts in Croatia, urged the Serbian people to return to their homes, and declared that the Croatian Catholic Bishop was highly respected by the Orthodox Church. Reflecting on the next phase of Croatian Catholic and Serbian Orthodox relations, Jovan said:

Before these obstacles, it can be said "it is impossible" or "it is possible with God's help." We would have to say "it is possible with God's help," althuugh it is not always possible to see the precise day, time, how and when. If we establish our position upon a firm Godly basis, then it will be possible to anticipate what we cannot plan. Therefore, this is one conversation that should guide our steps in this Christian direction toward some near or distant future. 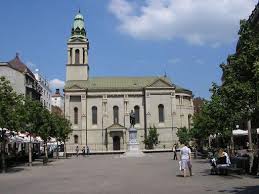 Perhaps Bishop Badurina and Metropolitan Jovan wrote the first words in a new chapter of reconciliation in a peaceful, multi-ethnic, and multi-religious Croatia of the twenty-first century.

Posted by Studia Croatica at 09:03