Annual Conference of Ambassadors, Consuls General and Military Envoys of the Republic of Croatia

Today, Croatia has the strongest foreign policy position since it was an internationally recognized state, said Prime Minister Andrej Plenković at the annual Conference of Ambassadors, Consuls General and Military Envoys of the Republic of Croatia, pointing to the next goals of Schengen and the euro.

The Annual Conference of Ambassadors, Consuls General and Military Envoys of the Republic of Croatia was held at the Westin Hotel in Zagreb on August 26 and 27, 2021.

On the second day of the conference, August 27, the ambassadors and consuls general will take part in panel discussions on current foreign policy and security challenges and cultural diplomacy. We heard a presentation by SOA (The Security and Intelligence Agency of Croatia) Director Daniel Markić and Minister of Culture and Media Nina Obuljen Koržinek.

"Croatia's foreign policy has never been stronger, our next goals are Schengen and the euro. Croatia today has the strongest foreign policy position since it was an internationally recognized state," Prime Minister Andrej Plenković stated at the annual Conference of Ambassadors, Consuls General and Military Envoys of the Republic of Croatia, which took place in the midst of the crisis in Afghanistan.

"Our main goals are to join Schengen as soon as possible, given what is happening in Afghanistan, and when it comes to the economy and finances, it is very important to enter the eurozone," said Parliament Speaker Jandroković. Jandroković warned of the strengthening of China, India, Brazil and that the EU can act as a force only with the joint action of its members. "If we look at countries separately and individually, we see that they are not forces, but if the EU will act uniquely in terms of markets, protection of its economic interests, then the EU's influence on the world economy is still very large," Jandroković said.

The situation in Kabul is chaotic as thousands of people seek to flee Afghanistan by August 31, the deadline for the withdrawal of U.S. troops. The crisis in Afghanistan raises the issue of refugees and potential new migrant flows. "The sustainability of the world order is being tested in Kabul at the moment. The world has become vulnerable, international law is being violated, "said Minister Grlić Radman and called for multilateral action and respect for human rights and the rule of law.

The European External Action Service has called on EU members to accept EU staff from Afghanistan, around 500 local people, mostly translators, logisticians and their families. Croatia will receive 20 people, and their arrival is coordinated by the Ministry of Foreign Affairs.

The President of the Republic Zoran Milanović met with the participants of the annual Conference of Ambassadors, Consuls General, Consuls and Military Envoys of the Republic of Croatia, which ended on 27 August with a reception at the Office of the President of the Republic. In his address to ambassadors, consuls general, consuls and military envoys, President Milanovic spoke about Croatia's relations with neighboring countries, emphasizing, among other things, how important it is for Croatia to build friendly and good neighborly relations with Bosnia and Herzegovina while taking care of equality for Croats in Bosnia and Herzegovina as a constituent people.

Furthermore, he spoke about Croatia's position within the European Union and the need for better and more efficient use of available funds from European funds, saying that he expected more financial benefits for Croatia from EU membership. In his address, he also stated his views regarding the expected entry of the Republic of Croatia into Schengen and the Eurozone.

President Milanović especially emphasized the need to take a clear and firm position of the Republic of Croatia in international relations when it comes to the protection of national interests and care for Croatian citizens. 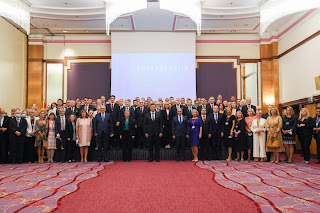 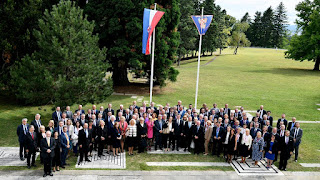 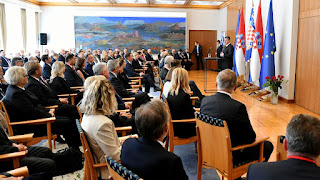 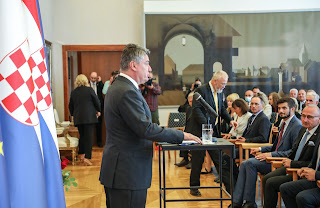 Posted by Studia Croatica at 16:40