A novel by Canadian-Croatian writer Katarina Pejaković presented at Matica

A novel by Canadian-Croatian writer Katarina Pejaković presented at Matica

The bilingual edition of the novel “Angel” was presented by the writer Anita Martinac, the president of the UV CHF Milan Kovač, Sanja Pažin on behalf of the publisher, the reviewer Anto Pranjkić and the author

Representatives of the novel spoke about the novel: the writer from Mostar Anita Martinac, the president of the UV CHF Milan Kovač, Sanja Pažin on behalf of the publisher, the reviewer Anto Pranjkić and the author. Vesna Kukavica was the editor of the Croatian Emigrant Anthology. The vocal-instrumental ensemble "Gavrani" of a returnee family of musicians from Australia took care of the appropriate musical framework of the program by processing several popular hits.

It is a great honor for me to greet you all as the director of the Croatian Heritage Foundation, on the occasion of the promotion of the new book by Katarina Pejaković from Canada. The Croatian community there is one of our most active emigrant organizations in the world.

Canada belongs to the group of the most economically developed countries in the world with an exemplary parliamentary democracy, which was among the first to recognize the Republic of Croatia. It is the result of the efforts of our people who live in Canada, among whom was the writer Pejaković. Congratulations once again to the author and publisher Kerigma - Pia, said, among other things, director Marić.

Along with many distinguished returnees from emigration, members of the Zagreb academic community and associates on numerous Matica projects, the promotion was also attended by the National Director of Pastoral Care for Croats Abroad, Dr. Tomislav Markić, Envoy of the Minister of Foreign Affairs Gordan Grlić Radman Ivan Marić and Envoy of the Canadian Ambassador to Croatia His Excellency Alan Bowman, Mrs. Ida Mahečić Bajović.

In her presentation, the promoter Anita Martinac said: "This novel -" Angel "- is more than a expressed love for the homeland of the Croats, because the author, nurturing the historical truth, is carefully watching the future. It awakens the reader by recalling the last two wars, describing events at sites related to the characters of the novel, although the same image can be replicated in the entire area where Croats lived.

It describes the Second World War and the genocide of Croats from Kupres (BIH), and the suffering and horrors that Croats endured in defense of the author's native Osijek during the Homeland War. Especially significant is the description of the life challenges of the Catholic population in the totalitarian communist regime in the period after the Second World War until the seventies of the last century until the Croatian Spring.

Three waves of emigration, in 1945, after the massacre and persecution of Croats, from 1965 to 1970 as a result of poor communist economic policy, and after the Croatian Spring again arrests, intimidation, persecution, and the third wave of emigrants.

All this was carried out with the intention of exterminating Croats, because apart from the fact that such a policy was carried out within the state borders, it was even more obvious to act through Yugoslav diplomacy and the secret service, forcing people to declare themselves Yugoslavs and not Croats. To endure so much suffering and then have to prove the truth again is an even greater pain. But, from the greatest pain, the most beautiful love is born ", concluded the promoter Martinac, warmly recommending the novel to the readers.

The author of the presented novel is the Croatian poet and journalist Katarina Pejaković (Dalj, 1953), who has lived in Canada since 1969. She graduated in political science from the University of British Columbia in Vancouver, and has worked publicly in Croatian organizations. She is the founder and long-time editor of the Croatian television program in Toronto and the Croatian radio program in Vancouver.

She writes emigrant lyrics with special love and publishes them in numerous Croatian emigrant media. He writes songs, stories, articles and plays for children in Croatian and English, and publishes his works in Hrvatska revija, Hrvatica and Hrvatsko kalendar and other emigrant magazines. In the Library of the Croatian Review she published a collection of poems "Lonely Travelers" (Barcelona, 1989), and in Zagreb in 1994 a book of essays "Ten Commandments of Love" (Naklada Meandar), and in 2006 the poetry collection "Shadow in the Eye" (HKZ - Hrvatsko slovo).

Her novel "Angel" is a stylistically readable contemporary, autobiographical prose, published in Croatian and English, and covers about two hundred pages. The idea for the novel originated during the Homeland War, on the occasion of a lecture at a Canadian high school, where the student was particularly impressed by the story of an angel from a Christmas card she received from a dissident uncle.

This is how the short story "Paper Angel" was created, published in Storyteller, Canada's Short Story Magazine - which was chosen as the best story of the year in 1993. In her latest work, in her mature years, she returns to traditional prayers.

The reminiscences of the novel cover the narrator's displacement and homeland, her wanderings around the world from her native Slavonia through Toronto and Ottawa to Vancouver on the west coast of Canada, but also the cradle of her mother, Marica Pejaković née Smoljan, to whom she dedicates the novel. "Angel" can be recognized as an inspiring realistic novel for young people, but also read as an excellent intergenerational novel since it points to the transgenerational trauma of the Croatian peasantry.

After many nice words and mutual thanks, praise to the author and the work on the promotion, let's say a thought, a lesson of this self-denying writer who continues to write in search of the truth.

"There are only two types of writers: one encourages the reader to think and the other to dream," said English writer Brian Wilson Aldiss (1925-2017). I hope, said Katarina Pejaković in one of her interviews after the publication of this novel, that I belong to the first category because I believe that writers and poets must be the conscience of their people. It is up to them to warn, warn and point out the need for change. 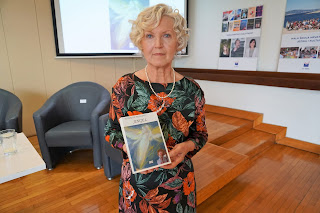 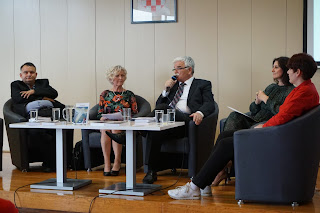 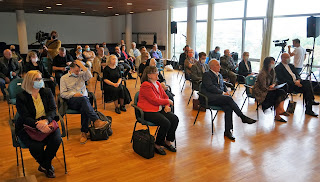 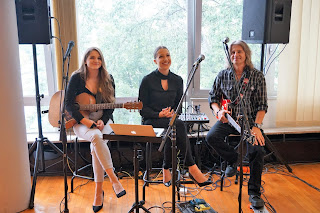 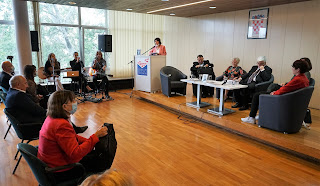 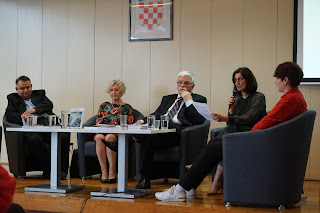 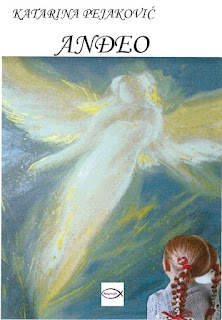 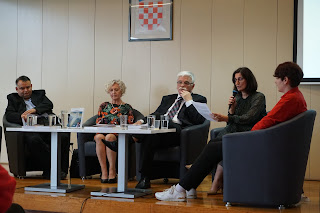 Posted by Studia Croatica at 18:56