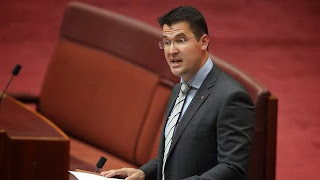 This is the text of the speech prepared by ACT Liberal Senator Zed Seselja for his maiden speech in Federal Parliament.


I am not the first person with a Croatian heritage to be elected to this place Mr President, but I believe I may be the first person who has two parents born in Croatia to be elected to the Australian Parliament, and it is to my parents Loui and Kate that I send my first and deepest thanks.
I will be forever grateful to my parents for all of the sacrifices they made, the opportunities they created, and the support they provided.
My parents left their native Croatia in search of freedom and a better life for our family.
Senator Zed Seselja delivers his maiden speech in the Senate.
Senator Zed Seselja delivers his maiden speech in the Senate. Photo: Alex Ellinghausen
They found those things here, in Canberra.
Advertisement
My father Loui worked a number of jobs, before going to night school to study photography. He then worked in the National Library’s photographics section, becoming a distinguished
local photographer, where he helped to chronicle the life of our region and our nation.
Mum looked after the kids and did an amazing job in tough circumstances.
Fellow new Senator Nova Peris congratulates Senator Zed Seselja.
Fellow new Senator Nova Peris congratulates Senator Zed Seselja. Photo: Alex Ellinghausen
Raising six kids on one modest income wasn’t easy, but it gave me the guiding principles and support that have led me to this place.
They gave me an appreciation of the value of hard work, perseverance and the art which many large families know about – getting a lot from a little. We didn’t have a lot, but we didn’t waste a lot either.
My parents gave me love, support and a deep sense of right and wrong. Most of all, they gave me opportunity.
They gave me the opportunity to receive a good education at St Thomas the Apostle in Kambah, Padua Catholic High School in Wanniassa and St Peters Catholic College in Isabella Plains.
I also had the opportunity and privilege of studying at the ANU and University of Canberra (glad to see the Vice Chancellor of UC Stephen Parker here with us today – who has done so much to turn around the performance of UC). I had the opportunity to work in the Australian public service, and later, the opportunity to serve my community in the Legislative Assembly.
Now, the opportunities given to me by my parents all those years ago, have led me to here –the highest parliament in the land.
I now take this opportunity, from the floor of the Senate of the Commonwealth of Australia – to say thank you to mum and dad.
You are both my heroes.
My parents also taught me manners Mr President, so I’d like to continue first with some of the other thank you’s before talking about other matters.
I’d like to thank the people of Canberra. First for endorsing me to serve for nearly nine years in the ACT Legislative Assembly, and now for the significant additional privilege to serve in the Australian Senate. It is an amazing honour. I pay tribute to those who have gone before me in this role - John Knight, Margaret Reid and Gary Humphries. All made significant contributions in this place and in service of the people of the ACT and the nation.
I’d like to thank the men and women of the ACT Division of the Liberal Party for giving me the honour to represent the Party, and to so many who worked so hard for my campaign.
Election successes are only possible because of the hard work of thousands of volunteers and here in Canberra we have some of the best.
My Party gave me the honour of leading it in the ACT for more than five years, and at two elections. I thank them for that. During those five years hard work, discipline and unity of purpose of the Parliamentary Party was central to us achieving a record number of seats for the Liberal Party in the ACT at the 2012 election. I believe that these principles are as true in large Parliaments as they are in Australia’s smallest Parliament.
I’d like to congratulate Tony Abbott on his election as Prime Minister. Changes of government are rare in Federal politics and the fact that it has happened just six years after the Coalition lost office is a tribute to the extraordinary leadership which Tony Abbott has shown over the past four years.
Might I also congratulate Senator Eric Abetz on becoming Leader of the Government in the Senate. A worthy honour for a great servant of the Liberal Party, Tasmania and the nation.
I’d like to recognise the Croatian Australian community, of which I remain a very proud part.
Mr President, I’m pleased we have with us in the gallery today the new Croatian Ambassador Dr Damir Kusen as well as the consul-general Mirjana Piskulic.
[A former member of this place, Natasha Stott-Despoja’s Croatian heritage is well known. In the gallery today we have Natasha’s father Mario Despoja. I first met Mario when doorknocking in Farrer for the 2004 election. He opened the door and excitedly made me wait while he produced a photo album picturing him and my parents at my parent’s wedding. I learned later that Mario had played a significant role during the struggle for Croatian independence, setting up a Croatian ‘embassy’ in Canberra in 1977, the year of my birth. I’m pleased that Mario is with us in the gallery today.]

Posted by Studia Croatica at 08:00