MYTH: "THE CROATIAN COAT OF ARMS IS A FASCIST SYMBOL" 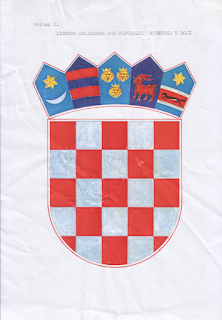 Myth: Croatia's twenty-five field "chessboard" coat-of-arms and the red, white and blue flag bearing that coat-of-arms are fascist symbols.
Reality: The ancient Croatian coat-of-arms has been used hundreds of years by every Croatian government and used by both royalist and communist Yugoslavia.
The tale that the Croatian coat-of-arms is a symbol of fascism is a very new myth that, like many others, was created by Serbian apologists and was repeated by many ill informed reporters. A major american daily paper wrote: "They waved the Croat checxered flag- something akin to waving a Confederate flag at an NAACP meeting." "Today again the Ustashe flag has been raised" cried another paper. "Tudjman's decision to adopt a flag modeled on the Ustashe flag has only made matters worse," lamented yet another.


It is ironic that those who repeated this myth did not mention or did not know that the government of Serbia from 1945 onward continued to use the same coat-of-arms used by the Nazi government of General Milan Nedic during World War II. The Serbian arms, a form of which appeared so prominently on the world's most viciously anti-Semitic postage stamps during the Second World War, continued to be proudly displayed by the communist Serbian regime in Serbia and in Serbian occupied Croatia and Bosnia in the 1990s.

Hrvatski Grb
The Hrvatski Grb or Croatian shield is one of the oldest national symbols in Europe. The true origins of the Grb (pronounced "gerb" with a trilled "r") have been lost to antiquity. Croatian mythology once said that King Stjepan Drzislav, who ruled Croatia from 969 to 997, defeated a Venetian prince at chess to maintain Croatia's freedom. In fact, Venice was defeated by Croatia in a sea battle in 887 and was forced to pay tribute to Croatia until 1000. There are many other myths regarding the origins and the exact design of the shield.

Many scholars believe that the Croatians originated in what became modern day Iran or Afghanistan, where they were mentioned in the cuneiform inscriptions of the Persian King Darius the Great (522-486 B.C.E.). The design of the Grb, red and white alternating fields, may have been related to the ancient Persian system linking colors with direction which resulted in such terms as the Red Sea and the Black Sea. The terms White Croatia and Red Croatia for western and southern Croatia were still in use well into the eleventh century. Silver seems to have been interchangeable with white throughout history.

The oldest existing Grb in Croatia is found on the wings of four falcons on a baptismal font donated by King Kresimir IV (1056-1073) to the Archbishop of Split. The Grb was used on document seals from the fifteenth century and can be found on stone carvings dating from 1490 in che cathedral of the Adriatic city of Senj, and a church on the island of Krk.

Although the Grb is usually found in its classic five-by-five form, there were numerous variations throughout history. One example is a charter of the Croatian Sabor or Parliament of 1527, which displays a shield of sixty-four fields. Perhaps best known to Croatians and tourists alike is the roof tile design of historic St. Mark's church in old Zagreb incorporating the coat-of arms of the triune Croatian Kingdom and the City of Zagreb. St. Mark's was built in the thirteenth century and beautifully restored between 1876 and 1882. In 1991, it narrowly missed destruction as a Serb aircraft missile intended to kill Croatian President Franjo Tudjman, struck the Presidential ofiices a few yards away.

Red or White?
Croatians have debated for generations whether the first of the twenty-five fields should be in white or red. Historically, red was more common in Croatia proper while white was more common in Bosnia. For most of Croatia's history, both versions can be found. Prior to the revolution 1848, red was most common. lrr 1848, the design was codified with twenty-five fields beginning with a white field. Under the Habsburgs, the Grb was incorporated into state anns of the Austro-Hungarian Empire.

When the Kingdom of Serbs, Croats and Slovenes formed in 1918, the first field reverted to red. Serbian King Alexander Karageorgevic ordered the Yugoslav coat-of-arms and his personal arms to incorporate the Grb, red field first. Those who called the Grb an affront to all Serbs were unaware that it was superimposed on the Serbian double-headed eagle by the last Serbian King and remained there throughout the life of royalist Yugoslavia.

When Croatia became a semi-autonomous Banovina in 1939, it retained the Grb and added the Serbian Crown above the shield. The NDH regime of World War II changed the first field to white and replaced the Royalist crown with a "U" for Ustase above the shield.

Emerging victorious in 1945, the communists introduced a Soviet-style coat-of arms with the usual sheaves of grain surmounted by a red star. Prominently in the center of the shield was the ever- present twenty-five field Grb with the first field back to red. It was the communists who first insisted that only red could be used in the first field. It became a crime to display the Grb with a premier white field. Whether through error or intent, the last constitution of communist Yugoslavia, adopted in 1974, displayed the arms of Croatia with a white premier field.

In May 1990, tens of thousands of red, white and blue flags with the ancient Hrvatski Grb appeared from hiding places to replace the red star of communism. The new Croatian government retained the traditional Croatian shield, red field first, with a five pointed crown representing five of Croatia's historical regions.

The Croatian fiag and coat-of-arms were carried into battle against the Turks. They were carried into battle by Croatian-American doughboys in World War I. They were carried joyously through the streets of Croatia in 1990 and to the top of Knin castle in 1995. The flag and coat-of-arms pre-date the arms of most European states and were in common use when Columbus set sail for India only to bump into America along the way. This is the reality of the Hrvatski Grb.