Myth: The people of Croatia asked to join Serbia in forming Yugoslavia in 1918. 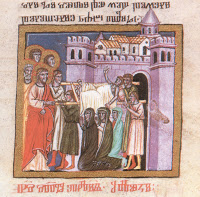 Reality: The people of Croatia did not ask to join Serbia in 1918. The elected representatives of the Croatian people voted for a "Neutral and Peasant Republic of Croatia" in 1918.

The concept of a unified South Slavic state had been discussed by Croatian and Slovenian intellectuals since the mid-nineteenth century. However, the "Yugoslav Idea" did not mature from the conceptual to practical state of planning. Few of those promoting such an entity had given any serious consideration to what form the new state should take. Nevertheless, the Yugoslav Committee issued a manifesto calling for the formation of such a South Slavic state on May 12, 1915. The document, like the rhetoric of those who produced it, was vague concerning the form and system of government. It received little official recognition.

At the same time Serbia, led by Nikola Pasic's pan-Serbian Radical Party, saw the "Yugoslav" concept as a useful tool in the long sought development of a "Greater Serbia." As the War dragged on, the Allies began to think of the concept of Yugoslavia as a blocking force in the Balkans to counter future German expansionism. Although no formal agreement was announced until July 1917, the Yugoslav Committee and the Serbian Government-in-Exile worked hand-in-hand from November 1916 onward. On July 20, 1917 the Serbian government and the Yugoslav Committee issued the text of an agreement known as the Declaration of Corfu which called for the formation of a multi-national state. The document was deliberately mute as to whether the government would take the form of Western-oriented Croatia or of the Eastern-oriented Serbia. The vast majority of the Serbian, Croatian and Slovenian people had no knowledge of the declaration made by a small group of exiled intellectuals and the Serbian Government-in-Exile. Nonetheless, the signers claimed to speak for all South Slavic peoples and the Declaration of Corfu became the justification claimed by Serbia for the forced unification of Croatians and Slovenes under the Serbian crown.

The Kingdom of Serbs, Croats and Slovenes

As the War drew to a close, the Austro-Hungarian Empire began to disintegrate. The Croatian Sabor or Parliament met in Zagreb on October 29, 1918 to declare "the Kingdom of Croatia, Slavonia and Dalmatia" to be a free and independent state. The Habsburg Crown recognized Croatia and transferred the Austro-Hungarian fleet to the Croatian government on October 31st. The Croatian government in Zagreb was fully formed before the fall of Austria on November 3, Germany on November 11, and Hungary on November 13. The Yugoslav National Council of Slovenes, Croats and Serbs was organized in Zagreb on October 15, 1918. This twenty-eight member Council was self-appointed, not elected. Although its president was a Slovene, the Council was dominated by Svetozar Pribicevic, a Serb. On November 24th this self-appointed group called for a common state with Serbia. This is the body so often cited as having "asked" to join Yugoslavia.

The mythology overlooks another Congress held just blocks away on the very next day. This was the Congress of Stjepan Radic's Croatian Peasant Party attended by almost three thousand elected delegates from every part of Croatia. The Peasant Party was the largest and most popular party in Croatia at that time and would remain so during the period between the Wars. It won absolute majorities in every subsequent election. This Congress assailed the National Council as arbitrary and unconstitutional and unanimously adopted a resolution calling for a "Neutral and Peasant Republic of Croatia." Following this Congress, there were huge demonstrations in the streets of Zagreb supporting independence.

Zagreb's brief jubilation quickly changed to the sober realization that Croatia would again be ruled from a foreign capital as Italian, French and French African forces invaded from the west and Serbian troops invaded from the east.

On December 1, 1918, Serbian Prince Alexander announced the formation of the Kingdom of Serbs, Croats and Slovenes, with a Serbian King ruling from the Serbian capital of Belgrade. Despite the neutral sounding name, the country was called Yugoslavia by the diplomatic community almost from the beginning. Ironically, at the Paris Peace Conference the Yugoslav delegation openly insisted that it be known as the "Serbian Delegation."

At the Peace Conference itself, the Croatians submitted a petition to President Wilson calling for an independent Croatia. With over 150,000 signatures and the notation that another 450,000 signatures had been seized by the Serbian Army, the document specifically asked:

That Mr. Wilson and the representatives of the great Powers should recognize the independence of the Croatian people;
That an international Commission should be sent to Croatia to inquire;

That a Constituent Assembly should be formed so that the Croatian people be free to decide their fate;

That the Serbian Army be withdrawn;

That the Sabor, should be respected as being alone authorized to the making of laws in Croatia; today, they are being dictated by Serbia and executed in the most brutal manner by the military.

Although submitted to the Paris Peace Conference on May 4th, 1919, the objections of the Croatian people were noted and then ignored by the United States and other so-called "Great Powers." President Wilson's famed Fourteen Points for which America had fought a World War were undergoing a metamorphosis at the Conference. Point X originally called for "...the freest opportunity of autonomous development" for the nations of Austria-Hungary and Point XI stipulated that "relations of the several Balkan states to one another be determined by friendly counsel along historically established lines of allegiance and nationality; and for international guarantees of the political and economic independence and territorial integrity of the several Balkan states."

The American delegation's commentary on the revision of Wilson's famous Fourteen Points noted that:

An internal problem arises out of the refusal of the Croats to accept the domination of the Serbs of the Serbian Kingdom.

In a classic example of diplomatic double-speak the delegation wrote:

The United States is clearly committed to the programme of national unity and independence. It must stipulate, however, for the protection of national minorities...it supports a programme aiming at a Confederation of Southeastern Europe.

Thus, in the eyes of the victorious Allies, in order to protect the Croatian nation, it was necessary to destroy it. There was no vote of the Croatian people about their future. By decree, Prince Alexander dissolved the Croatian National Council, convened a Parliament composed primarily of members of the Serbian Skupstina or Parliament and declared that all laws of the Serbian Constitution of 1903 were in effect throughout the land. Despite the fact that the purpose of the new Yugoslavia was supposed to be the unification of all South Slavs into one state, Serbia, making good on a secret pact with Italy made in 1915, handed over a large part of the land and population of Croatian Dalmatia to Italy, including the strategic cities of Rijeka and Zadar. For the first time in thirteen centuries the ancient Croatian institutions of Ban or Viceroy and Sabor or Parliament were abolished by the Serbian King. The long process of "Serbization" had begun.