21 Bosnia and Herzegovina and World War I

1. BOSNIA AND HERZEGOVINA FORM A POLITICAL UNIT WITH CROATIA PROPER

TODAY the provinces of Bosnia and Herzegovina have no natural boundaries of their own and they do not geopolitically constitute an independent and closed unit. These two provinces, as a political unit, are the result of their historic-cultural development which was initiated during the reign of Banus Culinus, at the end of the 12th century and was finally completed in our own time.
The relief and land formation of Bosnia and Herzegovina is the Middle-European mountain ranges, which we call the Alps. In the Western part of Middle-Croatia, the Alps mountains take on specific shapes and form some characteristics of their own. From the center of this region, the mountain chains extend across both Bosnia and Herzegovina in southeasterly and northwesterly directions. They terminate in the East, at the Drina river and in the southeast at the Lake of Scutari, which is on the frontier between the present Montenegro and Albania. Between the Croato-Bosnian mountains, numerous fertile valleys have been formed. Rivers wind their way through these valleys and roads have been built, connecting the Croatia-Pannonia regions with those of Dalmatia. All these provinces, Croatia-Pannonia, Bosnia and Herzegovina and Dalmatia are terrestrially closely united in one geographical body. The same geopolitical forces influenced and continue to influence the inhabitants of the regions.
The deep and precipitous river-bed of the Drina, together with the mountainous chains of the Podrinje and the nearby mountains of Bosnia and Herzegovina, strikingly divide the Middle Balkan region from Bosnia and Herzegovina. The mountain chains of Serbia extend from North to South and Southeast, which is just the opposite of the mountains of Bosnia and Herzegovina. The rivers with their valleys follow the same pattern, that is, the Kolubara and Morava rivers flow in a northerly direction while the Vardar river flows southeasterly. 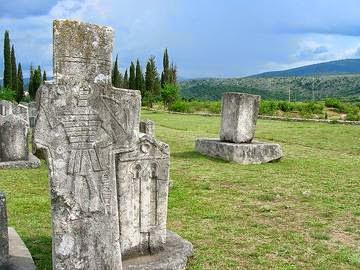 Posted by Studia Croatica at 16:13